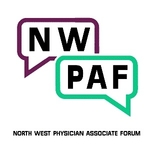 The North West Physician Associate Forum has had an online presence for a touch over 12 months now. Over this time we've seen social media followers grow from the committee and some friends to reach a heady triple figure. Whilst this figure may pale in comparison to some other social media 'celebrities' taking into account the target audience is rather specific, PA's, student PA's and those who work with or educate, in the North West, we're quite pleased with these numbers. I've included the proviso 'North West' as that is our target audience. But we've reached beyond this singular locale, we have Twitter followers outside of our home base even reaching overseas, our lone Canadian Twitter follower knows who they are; but on a more serious note, the fact that we've reached out to and have in turn been reached [?] to is a sign that the vision of the NWPAF has gone beyond the North West and touches upon PAs across the country.

Now it may seem that we've gone a bit off track, this piece is to reflect upon the online presence of the NWPAF over the past 12 months. But we would not have reached those other locales without having an online presence. We may have been able to reach them using just social media, probably not LinkedIn as that is still underrepresented (due to the more formal and employment based focus of LinkedIn I believe), but one of the strengths of having our dedicated website is not just so you can read our [admittedly] sporadic blog pieces like this one but in the fact that it is a stable platform. The website has capacity for a number of things that social media does not, and I will admit we don't use to its full potential. This is where you come in; what do you want on here? What would you like us to include? We are always open to suggestions from you, as we are here to support, empower and progress physician associates across the UK (starting in the North though, because that's where we live), so let us know by getting in touch at nortpa.forum@nhs.net.